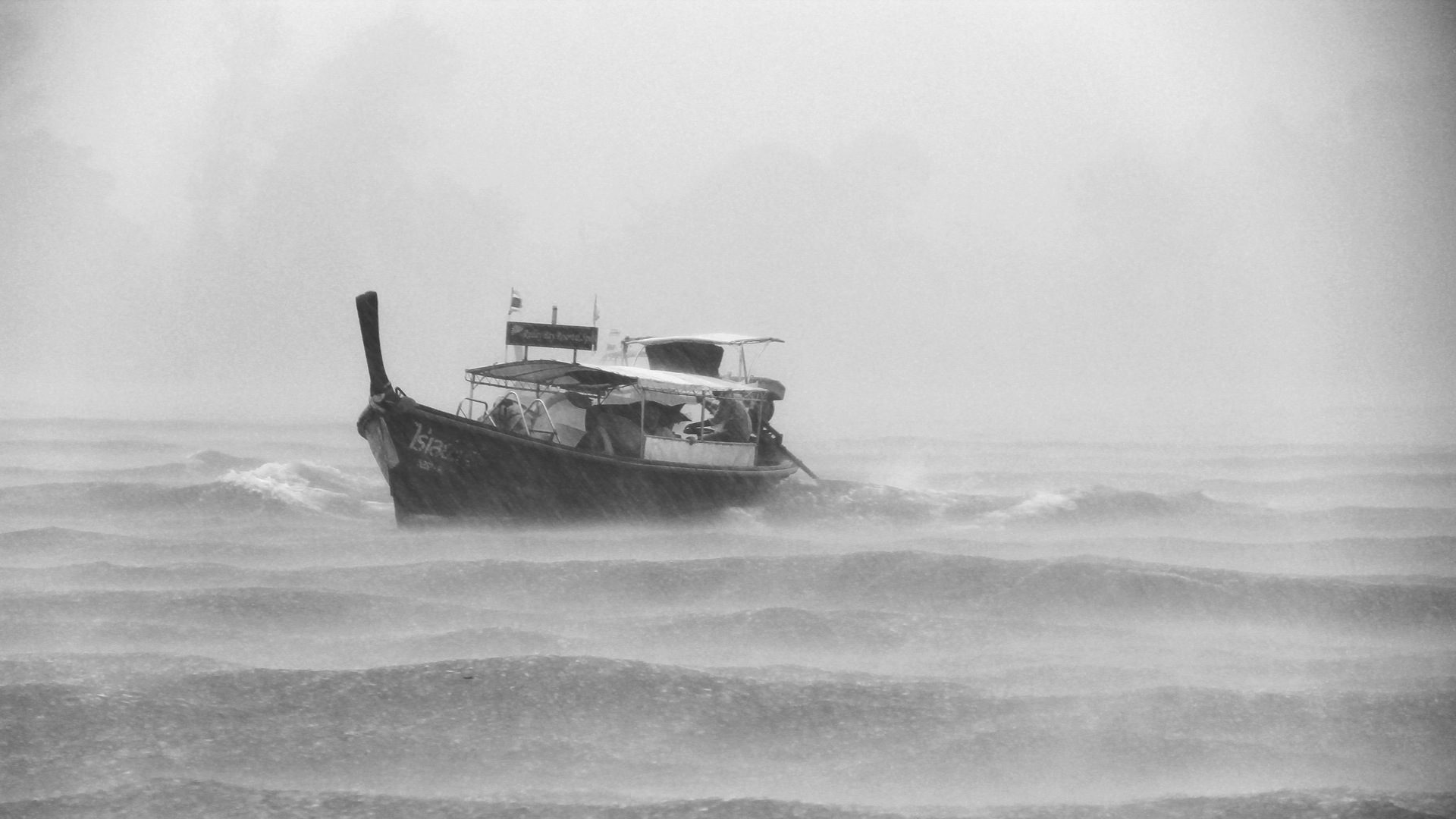 It’s been quite a while since I’ve started gathering some knowledge about the microservices architectural pattern that’s been on a hype recently. After reading many articles, some books like Microservices in .NET Core and talking with smart guys in the Devs PL Slack channel, I’ve eventually decided that the time has come to try to make the microservices happen in the real world project. That’s the beginning of my journey into the distributed programming and architecture, so please keep that in mind while reading this newbie’s post and remember I’d be more than happy to hear your opinions and feedback about the approach that I’m about to present.

The aforementioned real world project (or problem) is my open source project called Warden which aims to simplify the monitoring of the resources. Currently, we’re trying to build a whole new backend that will support a new web panel (and the other type of clients like mobile at some point in the future). So, what’s all the fuss about?
Imagine the following scenario: as the user, you can integrate the instance of your Warden (e.g. a simple monitoring application) with the API and send so-called check results created by the Watchers (responsible for monitoring the particular resources like websites, databases, files etc.) – the end result is that you’ll be able to see a dashboard (neat looking status page) with real-time updates about services or resources being currently (un)available as well as some additional stuff like the historical data.
As you may have already guessed, such data (single check result) can be pushed to the API quite often e.g. every second by many different watchers and even though the object itself ain’t that big (about 10 properties and 3-5 kB of JSON size), if you multiply it by hundreds or thousands of users (one day, hopefully) the amount of data can get really huge, not to mention the API that should process all of these requests quite fast. That’s where the microservices come into play. 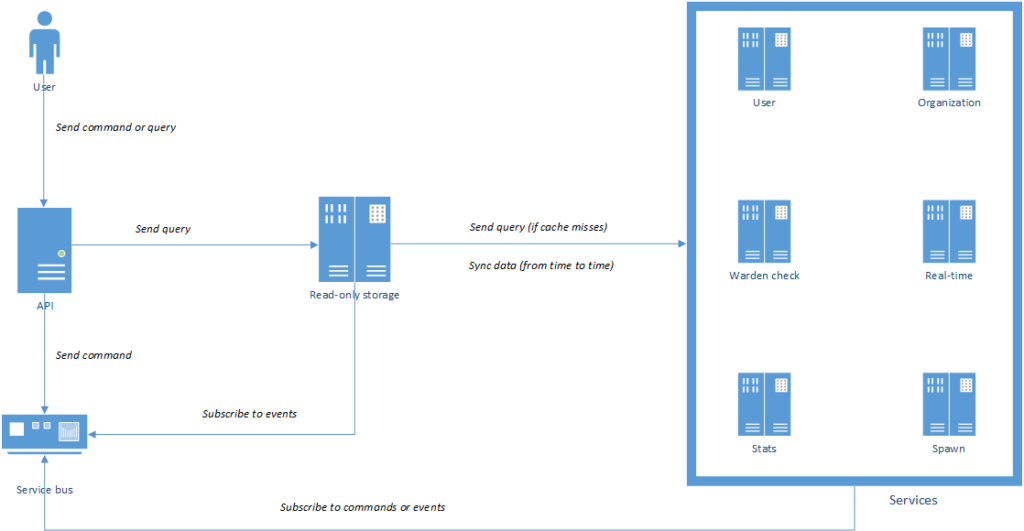 Above, you can see a beautiful, corporate drawing created with the Visio. Let me explain, step by step what I’m trying to achieve (and how), and please leave a comment if you (dis)agree with my point of view, as I’m rather a newbie in that matter. So, let’s begin with my humble explanations.
There’s a user using the Web panel’s dashboard to find out what’s actually happening with his system. The web interface makes use of the API which is merely a gateway. Of course, there might be many instances of the API and the same principle goes to the other services, as the scalability is one of the most important features here – let’s just assume that there’s already some intelligent router in place that can redirect the traffic and user requests.

The user can send a command request to the API which will be immediately sent to the service bus (RabbitMQ user here) and processed by one of the services that subscribes to the particular command or event. On the other hand, the user may also send a query request (e.g. fetch the historical data or so) and this one will be actually processed by the Storage service about which I’ll talk later. Let’s get back to the command processing – for example, there might be a CreateUser command handled by the User service which will then throw an UserCreated event that might be handled by another service etc. The goal is to have no dependencies between the services – they shall only react to the incoming commands and events via service bus, and of course possess their own local storage (database) for saving and querying the important data. Here are the service responsibilites so far:

The last remaining piece is the Storage service – its only job, is to provide a read-only storage for fast reads of the data using the API. It will also handle the events like UserCreated or WardenCheckResultSaved in order to save such objects in the most appropriate form (flatten them or something like this). The crucial part here is to select which data will be most commonly fetched by the users, yet my guess is that things like organizations (workspace), some recent stats and check results from the last 24 hours will be sufficient to cover 90-95% of the scenarios. For the remaining part, it might take a little bit longer to fetch the data from the Storage service that will first need to make an HTTP request to the services like Stats service if the user, for example, would like to see what happened 7 days ago.

In terms of storing the data, for the Storage service it would be more like partitioning (all instances of these services need to have the same data, which means all of them will process the same events and also make a data sync from time to time), while for the remaining services performing the actual business logic, the data storage might look more like sharding e.g. the first instance of User service processes the incoming CreateUser command and stores account info in its own local database. However, after giving it some more thought, such service may produce the UserCreated event that could be handled by the remaining instances of the User services, so at least in theory all of them will have the same data.

It looks like I’m going to heavily use the CQRS pattern and actually I’m quite happy about such outcome. Speaking of the code and technologies – we’re building everything on top of the .NET Core (so it runs cross-platform) using the NancyFX for the API, OWIN with Kestrel for hosting and the RabbitMQ service bus with RawRabbit client along with some other technologies. Feel free to check the repository which is currently under the heavy development (and refactoring). Here’s the sample of the simple microservice wrapper that I’ve created on my own:

You may wonder, why the heck does this guy already thinks about scaling multiple instances of services or creating a data storage for fast reads? There are 2 main factors behind this decision. The first one is that I really want to try to make a system that won’t be difficult to scale and handle a big traffic almost from its inception. I’d rather spend twice as much time now and build an infrastructure containing a set of separated, loosely coupled microservices, than a typical monolithic application which eventually will be cut it into pieces (services) once the performance issues start to occur.
And the second factor, equally important as the first one in my opinion, is that I want to learn something new. The paradigm shift which is moving into the cloud services has already started and as a software engineer I have to improve my skills all the time. Plus, it’s a pattern which I’ll probably use in my other projects that I’m working on like the sports & training app Fortitudo and the one that we’ve just started on GitHub within our Noordwind company.

I hope that my first architectural overview makes at least any sense – I’m looking forward to your comments and remarks, and hopefully I’ll be able to present the achieved goals later on this year.